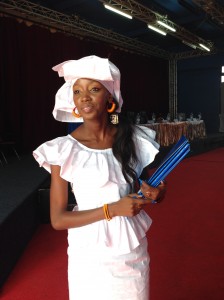 First of all I want to thank the ECOWAS Parliament and Senegal for hosting this conference. Your region called West Africa is a highly dynamic region, boasting Africa’s most populous nation Nigeria. Here we find the continent’s first stable constitutional democracy, namely Ghana. The region consists of robust and growing economies such as Cameroon, Ghana, Senegal and Nigeria. The first female president Ellen Johnson Sirleaf was elected in Liberia. You have done great progress in poverty reduction and in achieving the Millennium Developments Goals, but there is still much to be done, and it is here that the ECOWAS-Parliamentary cooperation has a crucial role to play.

The Millennium Development Goals are all about disaster and human tragedy. It is therefore encouraging to find some very positive results when it comes to your region. The proportion of the population living below an income of 1,25 USD/day is halve in Senegal, The Gambia, Guinea, Mali, Niger, Burkina Faso, Ghana, Togo, Benin and Nigeria.

The proposition of the population that is undernourished is halve in Mauritania, Mali, Niger, Burkina Faso, Ghana, Togo, Benin, and Nigeria.

Mali has achieved the goal of universal primary education. Liberia has reduced the child mortality by two-thirds. The Gambia, Mali, Guinea, Burkina Faso, Ghana and Benin will halve the proportion of people without sustainable access to drinking water. The maternal health situation is improving and the HIV begun to reverse the spread. And last but not least many countries promote gender equality and empower women, but a lot more needs to be done to achieve strong human development in the region, and that is one of the main targets for the work of ECOWAS.

Challenges are not negligible, West Africa periodically experiences violent civil conflict with repercussions over several generations sometimes, and it usually takes years to emerge completely from the economic setbacks.

You have experienced severe damage to livelihoods and food security through periodic and increasingly deleterious flooding and drought, and last year’s food crisis was compounded by political crisis and conflicts, as well as severe flooding in port and other strategic logistic corridors which impeded timely delivery of critical humanitarian goods and ultimately protracted the food crisis.

Fragile democracies, decades of post-colonialist military rule have simply muted underlying fissures, and it takes time to rebuild trust for government and nascent political parties. The goes for fragile economies – large informal economy, lubricated by the drug and arms trafficking which come with civil conflict and porous borders; alarming levels of youth unemployment, coupled with a population explosion whereby in some countries more than 50% of the population is under the age of 30.

We commend ECOWAS Parliament for taking on the challenge of tackling these issues through the human security and political stability lens: these perspectives permeate and define the challenges the region is facing to meet their development goals.

The ECOWAS Parliament is in a unique position to intervene in these issues, as many of the challenges are regional in scope – or take on regional proportions (i.e. flooding in Benin and Niger affected relief efforts in Mali; political crisis in Cote d’Ivoire affected neighbouring countries suddenly forced to deal with hundreds of thousands of refugees on a daily basis, etc.)

A greater role for the parliament will enhance the region’s ability to retain increasingly scarce donor funding, as well as building the capacity of national and regional entities to respond to their constituents, thereby strengthening political parties and the democratic process. Increased oversight and collaboration between the executive and legislative branches will increase aid effectiveness, ameliorate the perception of government and introduce accountability mechanisms which are necessary for effective programming and ultimately achieving development objectives.

We know that Africa has the knowledge, the technology and the means to end hunger and food security. We also know that a consistent strategy is needed. It will take a coordinated response across sectors, and ECOWAS has a crucial role to play. Institutions must be strengthened if fragile states shall develop into states where role of law is respected and good governance is implemented. Parliaments are legislators, and it a solid state is built on a legal system where laws are passed, implemented and respected. The value of cooperation by Parliaments cannot be overestimated. Equal legislation, equal rules, equal approach to common problems is a goal in any region with common interest, may it be the US, the EU or I would prefer to compare with the Nordic Council, a cooperation between the parliaments in the five independent states and the three autonomous territories in the Nordic countries having their 61st plenary session in Oslo this week. Already in the beginning of the 1950s did they have a common labor market and a passport union, long, long before the now existing Schengen union. Parliaments are bodies deciding on taxation, and domestic resource mobilization can only be done through a taxations system that is based on equal values, that respect bordering countries taxation system, and that is not seen as arbitrary. A condition for good governance, a system that combats corruption and let the guilty face justice is strong governing bodies, and if the whole region should follow this concept ECOWAS has a key-role to play.

The role of women in the political life is crucial. I represent Finland, the first country in the world where women had full political rights, the first country in the world to have female majority in the government, the first ASG in the UN system came from Finland etc. Women are significant food producers, but their control of land in sub-Saharan Africa is less than in any other region. Women in sub-Saharan Africa have less control than men do over productive resources such as assets, land and credit, their access to key institutions is curtailed 4 % of those who have signed a peace-treaty has been a woman during the last two decades. The UN Resolution 1325 on Women, Peace and Security must be followed up by an action-plan. Finland has now passed its second action plan, and this is of common interest to the ECOWAS Parliaments. Together you can write action plans and together you can see to that they are implemented.

It is easy to find many shortcomings and disturbing figures in West Africa, but now is the time for looking forward. A volatile situation is in itself a challenge and an encouragement for taking actions for changes. You have the golden egg in your hands; you can make it happen here and now. You are in the lucky position to have the attention of the international community, you have partners here and now ready to support and assist you, AWEPA is not the only. It is time to turn the guidelines into an action plan, and it is time to take concrete measures. We are here to see this happen during these three days of conference in Senegal. I wish us all luck. Yes, we can ! 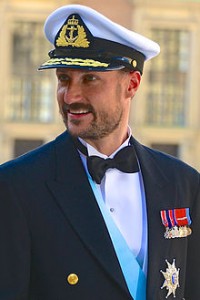 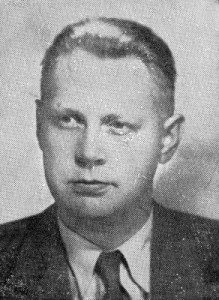 I have some friends here who made it all the way from London especially for this occasion, and even if you have not understood everything I have said, I can assure you that your presence here tonight in the French embassy is highly appreciated. 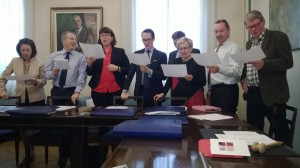 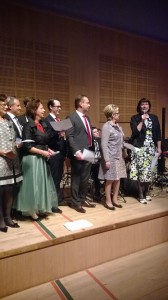 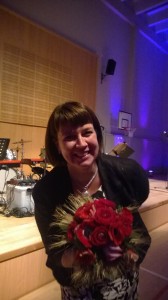 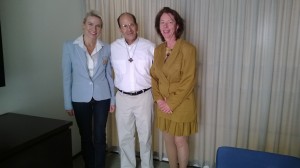 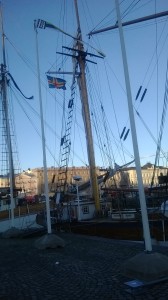